The Spanish Project Djehuty finds the coffin and the mummy of a young woman who lived 3,600 years ago with her trousseau

Djehuty Project, a Spanish archaeological mission led by José Manuel Galán, of the CSIC, discovers a coffin with a female mummy of about 15 or 16 years old buried with two earrings, two rings and four necklaces, one of them of great value
This 19th campaign of the project has also unearthed a small coffin with a wooden mummy figurine 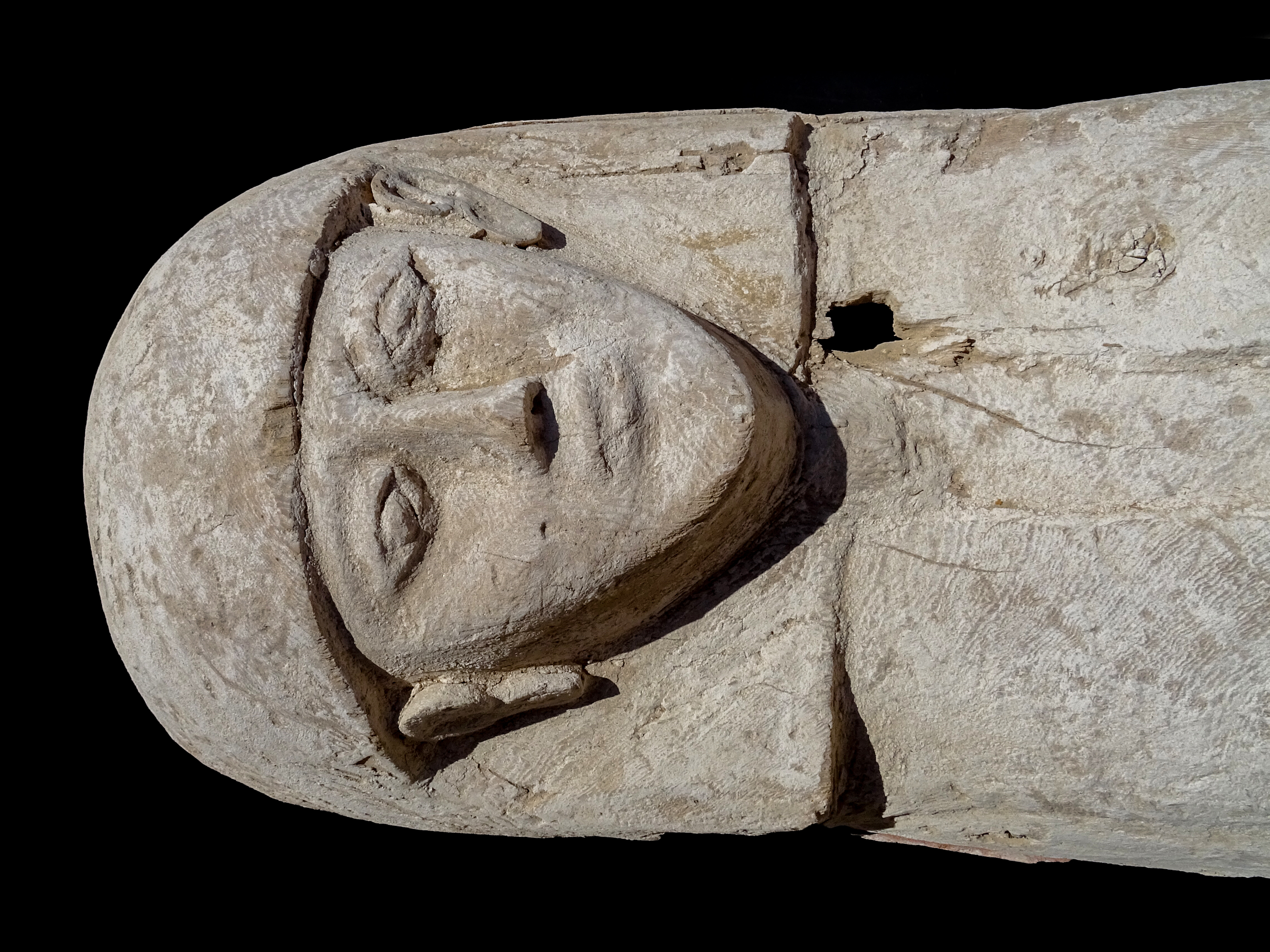 A few meters in front of the courtyard of the tomb-chapel of Djehuty (TT 11), next to a small chapel made of adobe from 1600 BC, an anthropomorphic coffin painted white was found, approximately from the same period as the chapel, that is, from the 17th Dynasty. The coffin was carved from a single tree trunk, probably sycamore, and measures 1.75 x 0.33 m. It seems that the coffin had been abandoned on the ground by grave robbers in ancient times. Despite this, the coffin had been left with some care and unopened.

Inside, the mummy of a young girl, about 15 or 16 years old and 1.59 m high, lay on the right side. The mummification technique was not very sophisticated at this time, and the mummy was in a rather precarious state of preservation.

After X-raying the mummy inside her coffin, it was discovered that she was wearing two earrings in her left ear and two rings, one made of bone and the other of blue glass with a lace and string around her finger.

On the chest, four necklaces between 61 and 70 centimeters long had been placed in a small pile. Two of them are made of fayenza beads of different shades of blue. A third combines fayenza beads with green glass beads. The fourth is the most elaborate and valuable, as it consists of 74 pieces of different shapes carved in amethyst, cornelian and other semi-precious stones that have not yet been identified, in addition to glass, and seven fayenza amulets. An amber hawk, representing the god Horus, seems to have been the central figure, flanked by two scarabs. 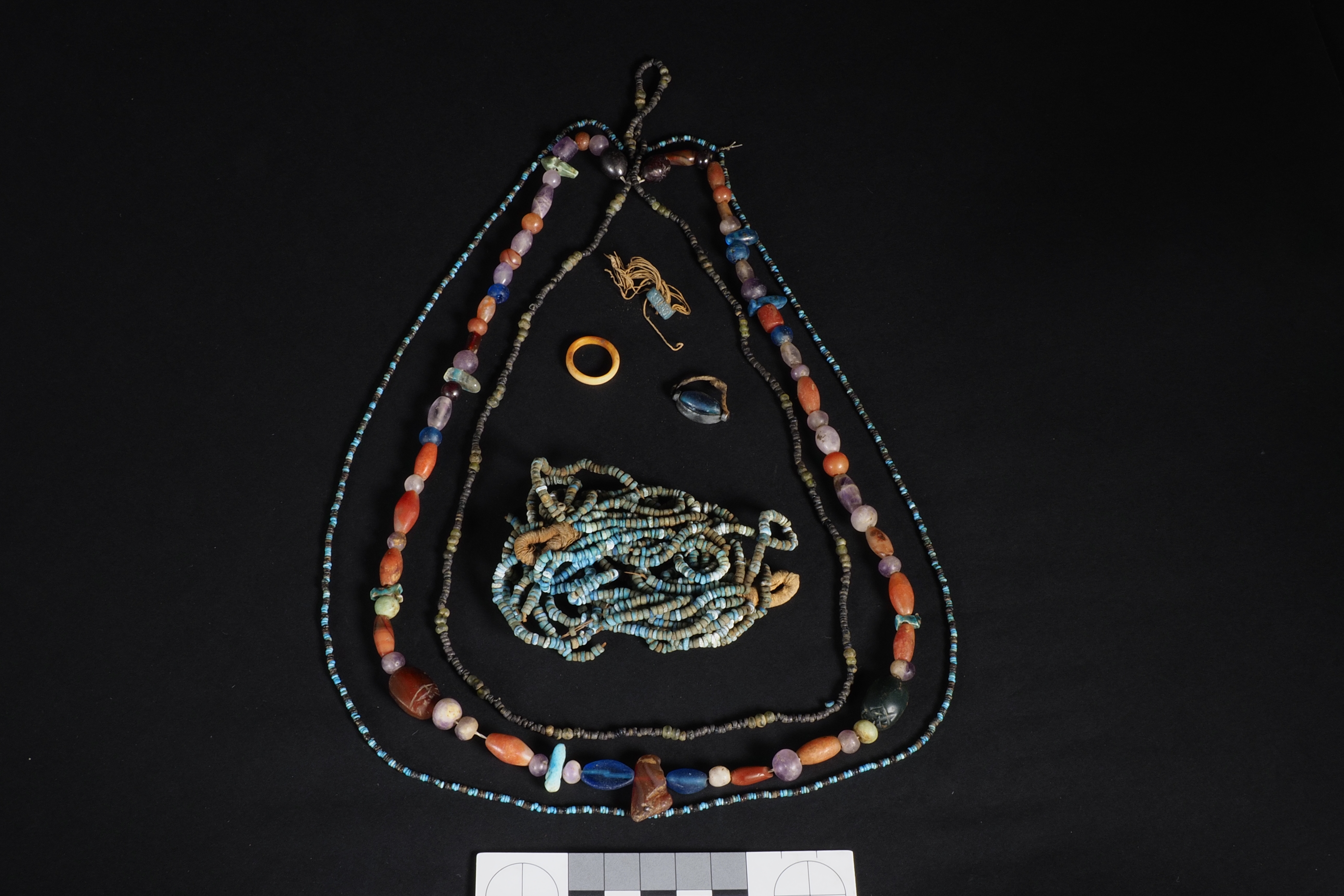 It is surprising how rich the trousseau is for such a young person with a relatively modest coffin. It should be remembered that at least three kings of the 17th Dynasty were buried in this area of the necropolis, and along with them, some members of their families and courtiers of the time residing in Thebes. A few metres away, the Spanish mission found several inscriptions and pieces of the funerary equipment of the son of King Intefmose; wooden figurines (called “shabtis”) and linen cloths with the name of the son of King Ahmose; as well as a splendid anthropomorphic coffin of the “rishi” type (with painted feathers on the lid) of a character called Neb.
A dozen coffins have been found at the site to date, left on the ground without any protection, which is unusual, and the percentage of children’s and women’s burials is also higher than in other parts of the necropolis.

A small coffin dedicated to Djehuty

Although on one side of the adobe chapel the coffin of a 15 or 16 year old girl was discovered, forgotten by the looters, on the other side we found a small clay coffin, measuring 22 x 12 x 15 cm, which still had the rope with which it was intended to remain closed, knotted. Inside, a human figure had been placed in wood and wrapped in four linen bandages knotted around the neck and ankles. The four bands are different and one of them has a horizontal inscription, written in black ink and cursive characters (“hieratic”) that identifies the owner as “The Osiris, Djehuty”. The same “label” was written vertically on the front of the body of the mummy-figure. Djehuty was a relatively popular name between 1600 and 1400 B.C. In this case, the date must be around 1600 B.C., that is, more than a hundred years before the character that gives its name to the project and that was buried in a big tomb not far from the place where the small coffin and its miniature mummy were found. The tomb or chapel with which the latter is to be associated is still an unknown.

Shabti’ made of wood with an earthenware and linen coffin An inscription identifies the owner as “The Osiris, Djehuty” / JAVIER TRUEBA

In the same area of the site, in the so-called Sector 10, southwest of the entrance courtyard to Djehuty’s tomb-chapel (TT 11), but this time inside a funerary shaft, they found in the last season of 2019 a pair of leather sandals dyed in leather and with the embossed decoration, including a couple of cats, Ibex goats, a rosette, the hippopotamus goddess Toeris/Taweret and the figure of the god Bes. Because of their size and the presence of two divinities associated with pregnancy and childbirth, the sandals may have belonged to a woman who must have lived around 1600 BC. Just below the sandals was a pair of leather balls filled with barley husk and attached to each other by a string. They could also have been part of a woman’s funeral equipment, since through plastic representations in almost contemporary tombs, games with balls seem to have been more common among women.

From a later period, from the 22nd Dynasty, around 900 BC, two metal objects have been found inside the bodies of two mummies that had been dismembered and violently opened by looters in ancient times. Paradoxically, what the thieves were most eagerly looking for, which was metal and semi-precious stones, were those they did not see because they acted too quickly and with very little illumination. One of the bodies still had a tin plate in place with the Eye of Horus engraved on one of its faces.

The square had been placed in the lateral incision through which the body of the deceased was eviscerated and then filled with linen, natron and sand. The Eye of Horus was supposed to protect the body from rotting. Tin was at that time a valuable metal because it was very scarce, and very few plates of this type have been found in situ.
On the second body a handful of yellowish, ochre-coloured earth had been placed in the place of the heart, and on this a necklace of eight silver plates covered with gold had been placed. The necklace had gone unnoticed by the thieves because the embalmers poured resin over it, thus blackening the gold. Each of the eight plates is engraved with an amulet that was supposed to protect the wearer from various evils: the Eye of Horus, the knot of Isis, the Djed pillar, the heart, the Khepri scarab, the Djed snake, the Nekhbet vulture and the usej necklace. On the restoration table, after cleaning the plates of resin, the necklace shone again as before.

Installation of a replica of a funeral garden

During the 16th campaign in 2017, a large tomb dating from approximately 2000 BC was found at the entrance to a large tomb, 3 x 2.3 m, built of mud and adobe. Each of the squares into which it was divided preserved the botanical remains of the plants that were planted there 4000 years ago. After its excavation and careful study, the consolidation of its structure was carried out, but, inevitably, due to its fragility, it had to remain hidden for its protection and conservation. As this is the only funeral garden that is well preserved and documented to date, thanks to funding from Tthe American Research Center in Egypt (ARCE-USAID), an exact replica of the garden was made in Madrid, in collaboration with Factum Arte, and moved to Egypt.

In a couple of years, visitors who come to enjoy the interior decoration of the tomb-chapel of Djehuty (TT 11) and its neighbor Hery (TT 12), will be able to see, instead, at least the replica of the funerary garden from the year 2000 BC. With the assembly of the replica of the garden in its place, we make it possible to preserve the original, without depriving the necropolis of one of its most significant structures. 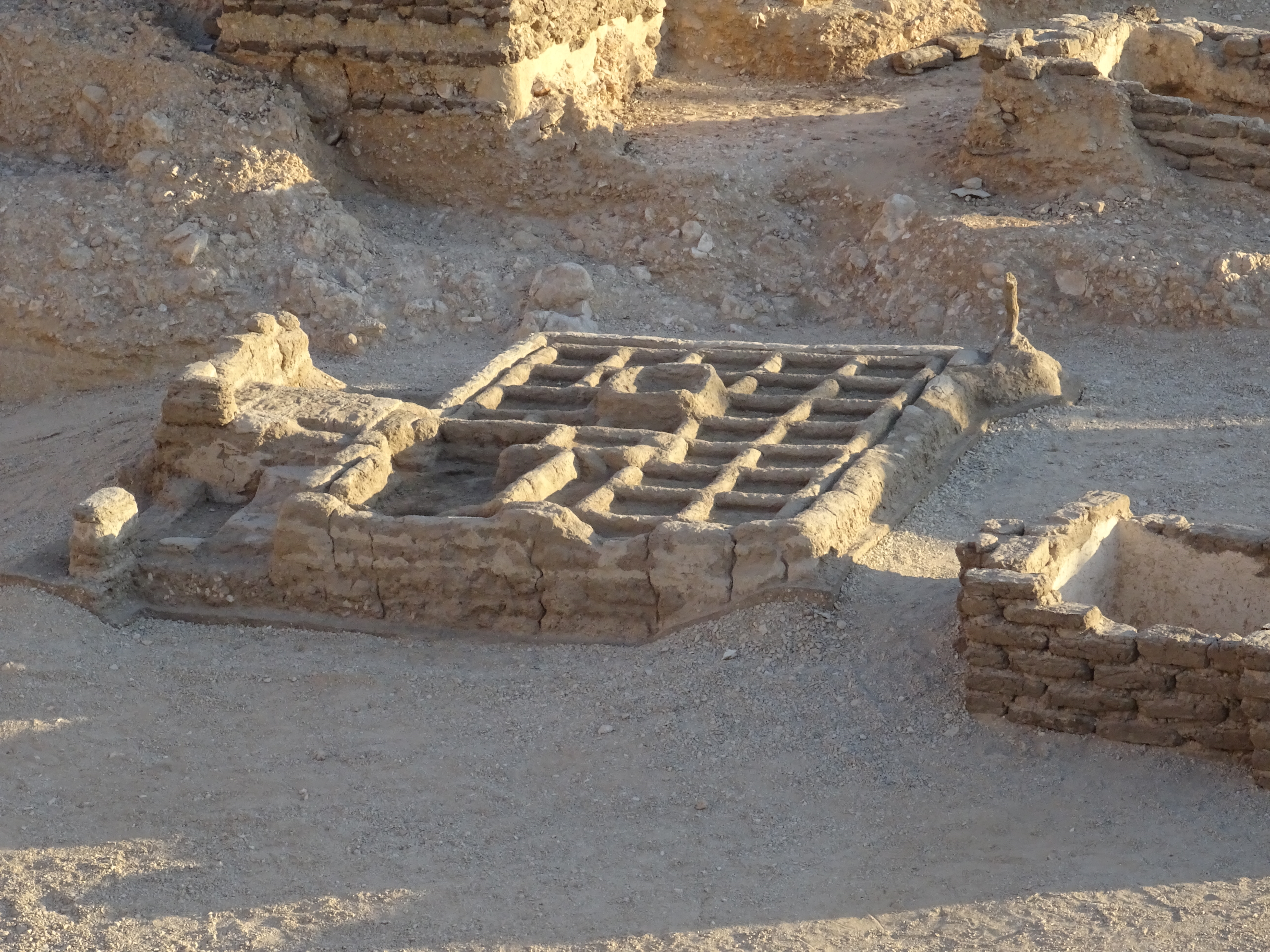 Replica of the funeral garden installed on the original / JAVIER TRUEBA

The Djehuty Project aims at the excavation, restoration and publication of an area of the necropolis of ancient Thebes, on the western bank of Luxor, in Egypt. The initiative takes its name from Djehuty, supervisor of the Treasury and the craftsmanship of Queen Hatshepsut, one of the few women who served as pharaoh in ancient Egypt and whose reign extended for 22 years in the 18th Dynasty, around 1470 BC. The archaeological and restoration works also focus on the nearby tomb of Hery, dated around 50 years earlier.

The excavation campaign has been supported and financially aided by the Ministry of Culture and Sport, the Ministry of Science, Innovation and Universities and, in addition, sponsored by Técnicas Reunidas, the Palarq Foundation and almost 300 patrons, who made their contributions through an online crowdfunding platform.