La Garma is a hill of 186 m high located next to the village of Omoño (Ribamontán al Monte, Cantabria), 11 km east of the city of Santander and about 5 km from the current coast. This place houses, in several caves and galleries of a complicated karstic system and in several open air sites, one of the richest and most spectacular archaeological sets in Europe. Its exceptional value has made it worthy of being included, since 2008, in the UNESCO World Heritage List.

The scientific and patrimonial importance of La Garma derives fundamentally from two facts. On the one hand, from the extraordinary variety of archaeological evidence found, which covers practically the entire past of the Cantabrian region, from the pre-Andertal groups of the Middle Pleistocene (around 400,000 years ago) to the 13th century AD. The Garma documents the oldest evidence of human presence in the Cantabrian region, occupations from all stages of the Upper Palaeolithic, excellent paintings and engravings from the latter period, two shells and a Mesolithic tomb, Neolithic remains, funerary structures from the Chalcolithic and Bronze Ages, a castro from the early Iron Age, and tombs and other evidence from the Visigothic and Early Middle Ages. In very few places can one find such a long and complete archaeological sequence.

On the other hand, La Garma houses a unique site in the world for the documentation of the ways of life, ritual and symbolism of the groups of the Paleolithic: the Lower Gallery. This is a cave whose original entrance was blinded by a collapse during the last glaciation, which has made it a real prehistoric “time capsule” where, without the need for excavations, the remains of the activities of the Palaeolithic hunters can be observed, just as they were left by their last inhabitants some 16700 years ago. These include one of the most relevant collections of movable art in Europe, with more than thirty first-rate objects, some as remarkable as a magnificent bone spatula with a representation of a mountain goat in relief, a uro phalanx in which a specimen of this species of wild bull has been engraved in relief, associated with a sign and a human head, or a magnificent outline cut out in the shape of a mountain goat’s head. 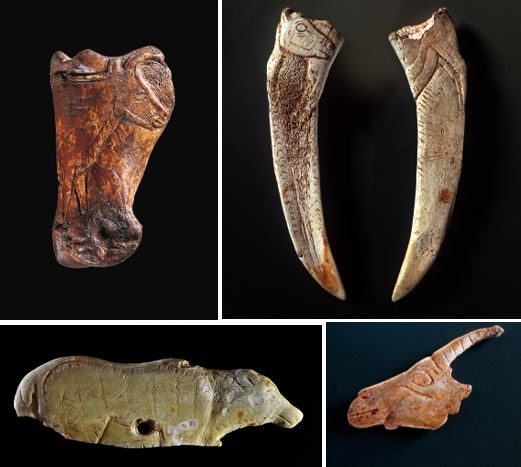 But not only can thousands of objects be seen (it can be estimated that some 76,000 are in plain sight), but even the remains of at least nine constructions which, according to all indications, correspond to huts made of perishable material used as dwellings and in some cases probably also as ritual spaces. In one of the latter, the use of a lion’s skin from the caves has been found, a large feline that became extinct at the end of the last glaciation.

La Garma also stands out for its impressive collection of Palaeolithic cave art, the most important discovered in Cantabria after the First World War, with more than 500 paintings and engravings, including almost a hundred animal representations (deer, horses, bison, goats, aurochs, mega-cars, carnivores…), forty hands in negative, three “masks” and around a hundred geometric motifs or signs. No less important is the existence of fundamental information about the context of art. In the Lower Gallery the graphic manifestations are located on walls and ceilings adjacent to the Magdalenian floors, and in these numerous archaeological remains have been found that are linked to the execution of some of the paintings and engravings (signs of the preparation of the colourings, for example) or to their frequentation (footprints, paths…) 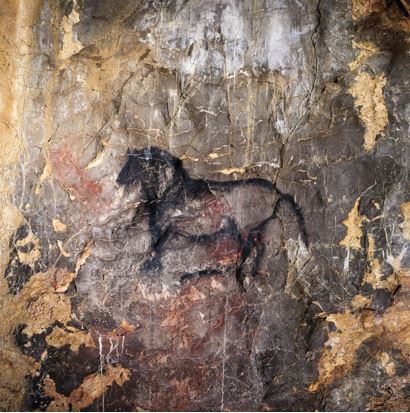 The project is designed from a perspective that puts conservation above all other approaches. We are faced with an archaeological document that is unique in the world, both for its richness and extension and for its extraordinary state. It did not seem advisable, therefore, to use conventional archaeological methods, which would have made such an exceptional part of the World Heritage disappear. For this reason, from the very beginning of the project, we opted to give priority to non-invasive approaches, which led us to develop a specific protocol of action, different from conventional archaeological excavation.
Our approach has been to try to document the site without altering the soils, limiting the extraction of archaeological materials as much as possible and studying everything possible in situ. We could define it as “moving the laboratory to the cave”, instead of the usual transfer of materials from excavations to museums and research centres. The application of some innovative techniques, such as the realization of continuous true giga-ortoimages of the Palaeolithic soils of the cave, the hyperspectral analysis and by means of pXRF spectrometry of the paintings, the realization of a high resolution 3D cartography of the magnetic field of the Palaeolithic soils, the study of fatty acids in the sediments or the determination of the remains of fauna through the ZooMS technique (mass spectrometry of bone collagen peptides) have also contributed to the miracle of restoring this Palaeolithic camp without destroying it. We must emphasize that the realization of several of these techniques, very expensive, has been possible thanks to the contribution of two private foundations, the Stuart Weitzman Foundation for the Preservation of the Cantabria Prehistoric Caves and the Palarq Foundation, which have joined in the last years the main source of financing of the project, which has been, from the beginning, the Government of Cantabria.

The scientific and patrimonial importance of La Garma and the need to make known such a special place, which will never be open to the public, have also led us to dedicate a considerable effort to the dissemination of the archaeological site. In addition to two major exhibitions presented in Cantabria, at the Museu d’Arqueologia de Catalunya and at the Museo Arqueológico Nacional, numerous conferences in various European, Asian and American countries and articles for the general public, it is worth mentioning that in 2003 we produced a facsimile reproduction of a section of the Lower Gallery. This replica, made by the same team that made the “neocueva” of Altamira (Matilde Múzquiz, Pedro Saura and the company Tragacanto, S.L.), can now be seen in the permanent exhibition of the Museum of Prehistory and Archaeology of Cantabria. But technologies are advancing at full speed and today it is essential to use 3D restitution and virtual reality techniques. To this end, thanks to the generous contribution of the Stuart Weitzman Foundation and the World Monuments Fund, “Memoria: stories of La Garma“, an interactive journey in Virtual Reality, narrated by Geraldine Chaplin, which allows the user to explore the interior of La Garma, moving freely through various areas of the cave, and offers the recreation of various activities of the Palaeolithic hunters, their constructions, and the terrifying cave lion that descended to the depths of the cave to live out his last days. The work, produced by Morena Films and made by Overlat, S.L, has been selected in several film festivals and new technologies, and has been included by Forbes magazine among the 50 best RV experiences of the year 2019. 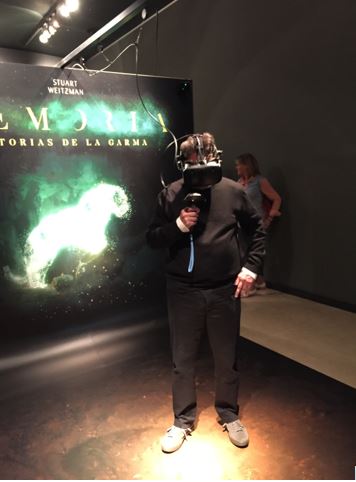