La Blanca, an exceptional Mayan city due to its palatial constructions, has the widest vault ever documented in the entire Mayan area.

Located near Petén, cradle of the Mayan civilization

City abandoned in the famous “collapse” of classical Mayan civilization

May 27, 2019 was an important day for the population of La Blanca village, located a short distance from the archaeological ruins of the same name. These are located at the foot of a mountain range that runs along the west side of the Mopán River Valley, located in the department of Petén, cradle of Mayan civilization. That day took place the official act of delivery to the Guatemalan authorities of the archaeological works and of putting in value of the cultural patrimony that since the year 2004 the Project La Blanca has carried out in this archaeological site.

Aerial view of the Acropolis of La Blanca after its excavation. (Image taken by dron from the Ministry of Culture and Sports of Guatemala)

In these fifteen years of research, discoveries of great relevance have been made, both in La Blanca and in other surrounding sites, among them Chilonché, and methodological innovations have been introduced, such as the application of new digital technologies for the excavation, documentation and study of exhumed patrimonial goods. Several researchers have also been trained in this project, developing their doctoral theses on topics of archaeology, architecture, art history and restoration. But without a doubt, one of the main contributions of the project has been the enhancement of the exceptional architecture of La Blanca and the creation of the necessary infrastructures (Visitors’ Centre, information panels, interpretive trail, etc.) for the enjoyment of the local population and other visitors from all over the world.

The ancient Maya who lived in this city knew how to take advantage of the benefits derived from the exploitation of its natural resources and the control of the commercial routes that ran through this river valley, one of the main communication routes between the Highlands and the Mayan Lowlands. Proof of this is the exceptionality of its palatial constructions, especially in its Acropolis, where is the palace that has the widest vault so far documented throughout the Mayan area. In the case of La Blanca, the vaults are of great dimensions and are placed one on top of the other, increasing the overhang and with the interior face perfectly carved to obtain a perfect inclined plane. The interior spaces are, therefore, of great amplitude and all the rooms have enormous benches that run longitudinally through them. They also embellished these palaces with sculptural reliefs and wall paintings, without forgetting the presence of original graffiti, very abundant in the walls of these palaces.

Finding of the carved relief i 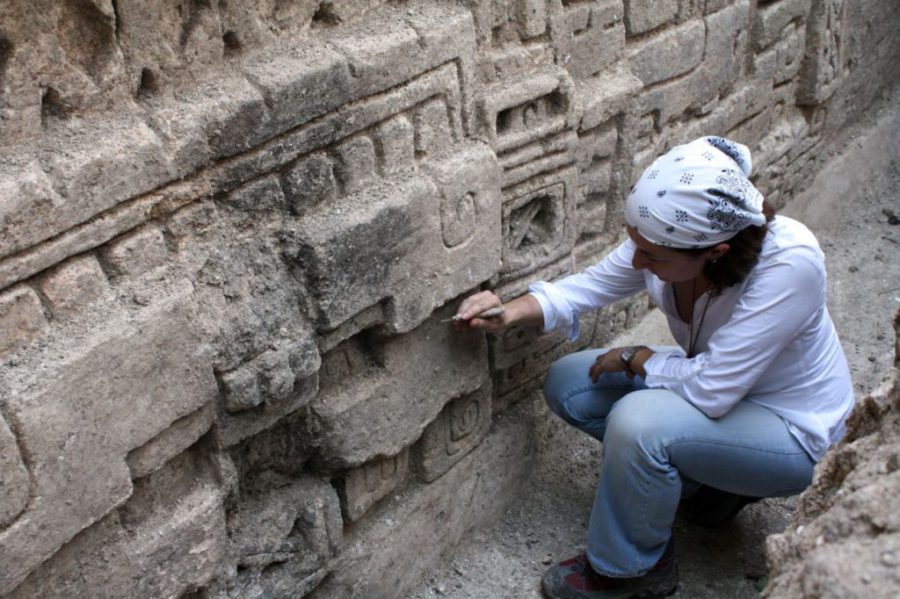 Finding the relief carved at the base of the Substructure of La Blanca – Photo: Patricia Horcajada

Thanks to these graffiti we know that inside these palatial rooms there were receptions presided over by the ruler, in which musicians and other members of the court participated. Fauna is also well represented in the art of graffiti, and skeletal remains of these same animals were found in the excavation of the interior of the rooms, in which rituals were celebrated and offerings of termination were deposited. This coincided with the abandonment of the city by its inhabitants during the famous crisis of the late ninth century AD, known as the “collapse” of classical Mayan civilization. The palaces of La Blanca were no longer inhabited by the elite, but some of them became places of worship and even burial of other individuals from later times, so that the study of these remains has provided very important information to deepen the knowledge of these episodes of crisis that led to the abandonment of Mayan cities, until they were gradually engulfed by the thickness of the tropical forest.

And so it was that we found La Blanca in 2004, totally covered by the jungle vegetation, which is why having given it back the splendor it once enjoyed has been highly valued by the heirs of this exceptional cultural heritage, who until then did not feel at all identified with the archaeological site. And this is what they wanted to show us with the exciting event organized by the two schools of the village on the day of the official presentation of the archaeological works. In the courtyard of one of them there was a dance in which the girls were dressed in skirts painted with images of the village and the ruins, and which read: “The White. Archaeology and development”. The dance was performed to the rhythm of a song composed by the headmaster of the school, one of whose refrains says so:

Dance performed by the girls of the Escuela Rural Oficial Mixta de la Aldea La Blanca during the celebration of May 27, 2019. (Photo G. Muñoz)

Don’t stay without coming to visit the archaeological site that will make you fall in love.