Summary of the 2020 campaign in the Qubbet el-Hawa Necropolis (Aswan, Egypt)

Since 2008, the University of Jaen has been excavating in the necropolis where the highest officials of Egypt’s southernmost province were buried between 2200 and 1800 BC.
This province, whose capital was located on the island of Elephantina, played a very important role in the history of Egypt, as it was the border between Egypt and Lower Nubia.
The last three researchers of the Qubbet el-Hawa Project directed by the University of Jaen in Aswan returned to Spain this Tuesday, March 17, after the worsening of the situation in Egypt by the Covid-19 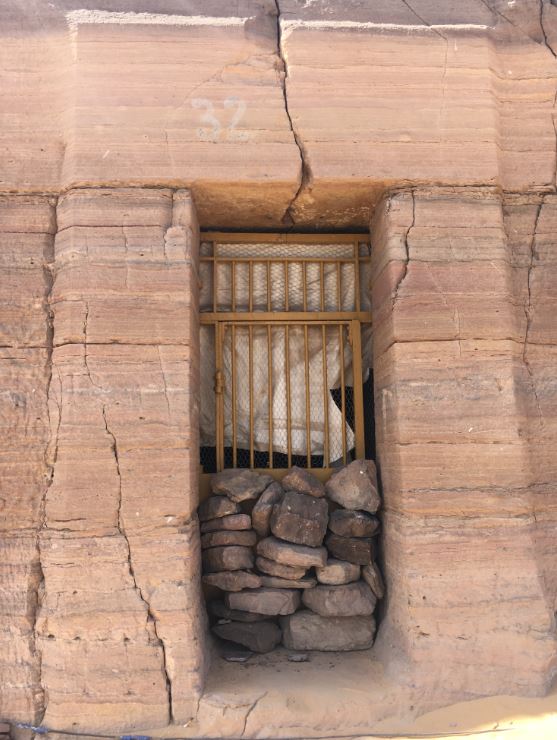 Closure of the tombs QH35p, QH35n, QH31 and QH33 at the end of the campaya in the site of Qubbet el-Hawa (Aswan, Egypt) Photography:Dr. José Manuel Alba (co-director of the project)

The province had important outcrops of various stones such as granite and sandstone, which made it a regular destination for the royal missions. The high officials of the province therefore played a very important role in international relations with the southern regions and in supplying the king’s envoys. Moreover, Elephantina, as a border, was the recipient of products, people and ideas coming from the southern countries, as well as the last Egyptian centre of the Egyptian commercial and military missions.
The extension of the necropolis of Qubbet el-Hawa, where more than one hundred tombs excavated in the rock are known today, forced the Spanish researchers on the project to focus on a specific period, the Middle Kingdom, and more specifically the 12th Dynasty. During this period, which extends from 1930 to 1800 B.C., Elephantina was ruled by a family dynasty that had strong ties to the reigning dynasty in Egypt. In Qubbet el-Hawa, they built a funeral complex where these governors and the individuals in their inner circle, including their closest relatives, were buried. Many of them are known thanks to inscriptions found in nearby places, but others are new to history. On many occasions, these new individuals carry titles that are allowing us to reconstruct the functioning of the ruling class and who composed it.

Excavation in the wells of tomb QH32, which includes the movement of a large closing slab and chemical analysis work: Photographs: Dr. José Manuel Alba (co-director of the project)

In the year 2020, the main objectives of the project of the University of Jaén in Qubbet el-Hawa have been focused on the study of the materials found in past campaigns in the tombs QH35p, QH35n, QH31 and QH33, as well as on the completion of the excavation of the shafts of the room of the pillars of the QH32 tomb. This tomb, although built during the mid-12th Dynasty, was reused and redecorated by an Aku in the early 18th Dynasty. One of the objectives of the present campaign was to determine the exact date of its construction, as well as to confirm the name of its owner. At present, we attribute this tomb to Governor Khema, based on the ceramics, the architectural characteristics and the location of this great tomb.

One of the most important actions that have been carried out has been the analysis of pigments in the coffins and cardboards of the Middle Kingdom. These analyses show notorious differences in the quality of the materials based on the population segment to which the owner of the trousseau belongs. Also, the origins of some of the pigments can be determined, the most interesting being those coming from foreign lands.
The Topography team has successfully carried out 3D scanning and photogrammetry of numerous areas and tombs. All this is allowing us to obtain important real results about the location and orientation of the ancient tombs.