Papers can be submitted from September 10 to October 20

Madrid, September 7, 2018 – Palarq Foundation, a private, non-profit organization created to support Spanish Archaeological Missions abroad, excluding Europe, has announced the first edition of the National Award for Archaeology and Paleontology bearing its name and endowed with €80,000. Entries may be submitted from September 10 to October 20.

Palarq Foundation National Award for Archaeology and Palaeontology is a biennial award and the first to be awarded from private initiative and through a foundation, aims to recognise the excellence and originality of Archaeological or Palaeontological projects, directed by Spanish research teams and developed both nationally and internationally, without restrictions of cultures or historical periods. Paleontology projects must be related to human evolution.

Thus, from  September 10 to October 20 , those research teams belonging to a Spanish institution: universities, research institutes, CSIC, ICREA and similar, who are directing an Archaeology or Paleontology project at a national or international level, which is underway at the time of the announcement of the Award, will be eligible for this award. 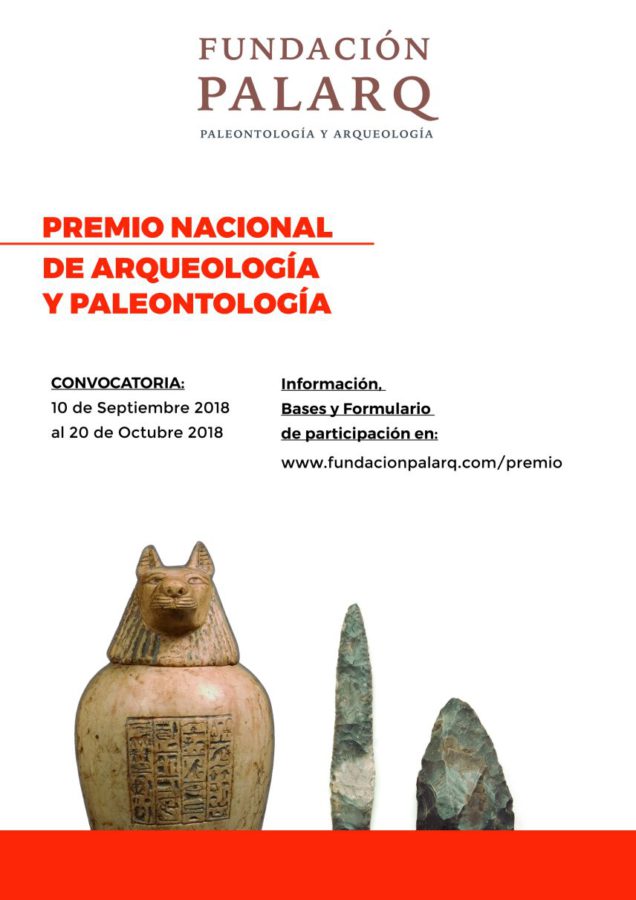 Poster with the image of the award

Between October 20 and November 9, the finalists will be pre-selected by a committee of experts to transmit the names of the finalists to the Jury. The award ceremony will take place on 27 November at the Museo Nacional de Arqueología in Madrid.

The Jury of the Award is formed by personalities of recognized prestige in the cultural field:

Prof. Yves Coppens, was in 1974 one of the discoverers of Lucy, the famous Australopithecus found in Africa in the seventies. Among many other distinctions, she has been awarded the Grand Prix scientifique by the Fondation de France.
Mr. Andrew Selkirk, vice-president of the Royal Archaeological Institute and co-founder of the British Archaeology Award.
Mr. Luis Monreal, Director General of the Aga Khan Foundation, Geneva.
Mr. Pepe Serra Villalba, Director of the Museu Nacional d’Art de Catalunya (MNAC).
Mr. Josep Guitart Duran, Emeritus Professor of Archaeology at the Autonomous University of Barcelona and currently president of the international project Tabula Imperio Romano – Forma Orbis Romani, promoted by the Union Academique Internationale.
Mr. Jacinto Antón de Vez, National Award for Cultural Journalism awarded by the Ministry of Culture.

Projects will be submitted by filling out an online form from the Palarq Foundation website.

The amount of the Award, 80,000 €, will be allocated to the winning project itself, being the responsibility of its director(s), to present a budget for the application of the Award money to the project, and to ensure the adequate application of the amount to field, archaeological or paleontological interventions, as well as to the processes and actions (especially of an analytical nature) on archaeological or paleontological goods coming from such interventions.

The Palarq Foundation is a private, non-profit entity created with the aim of supporting Spanish Archaeological Missions abroad, excluding Europe, within a perspective that extends from the paleontological stage to prehistoric and historical periods of monumental interest. Established two years ago, in 2017 a total of 32 projects were supported, all outside Spain and Europe. In this year’s call, 55 projects have been submitted which will be evaluated and the resolution of which will be announced in the fourth quarter of this year. Its president is Antonio Gallardo and its director, Carolina Bähr.