Montvell, site specialising in the extraction of flint

LITOcat, an indispensable tool for the study of strategies for the supply and management of mineral resources by prehistoric societies 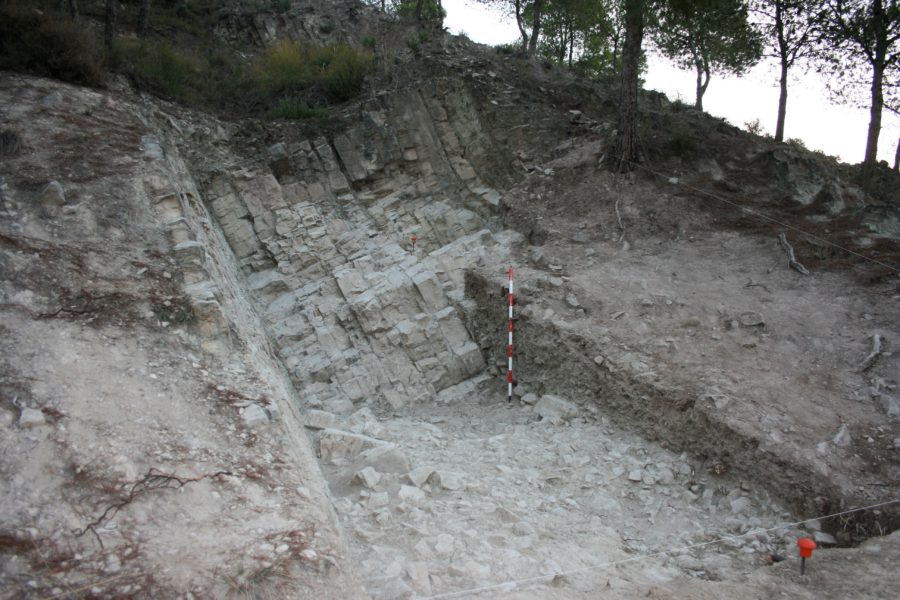 Front of Montvell quarry (UE1001) and associated rubble dump (UE1004) at the end of the 2017 excavation. Author: Xavier Terradas

Over the last few years we have been developing the LITOcat project, consisting of the creation of a reference collection of silica rocks -or lithoteca- in the Northeast of the Iberian Peninsula. Beyond the collection, the project has generated a wide documentary repertoire in different formats (records of outcrops, geospatial data, samples, analysis, photographs, technical reports, bibliography…), available for all those teams and researchers interested in the availability of siliceous rocks and their characterization. These data constitute the basis on which to construct hypotheses about the mobility of prehistoric societies, the existence of contacts with other communities, as well as the establishment and scope of distribution networks and exchange of materials, products and ideas.

On the occasion of the prospections carried out, we were able to document evidence of prehistoric mining on the slopes of Serra Llarga. This evidence consisted of the identification of various quarry fronts, the accumulation of significant quantities of rubble with remains of flint and the presence of heavy mining instruments made in rocks that were not typical of the area. All this led us to propose the existence of a surface mining operation in the hills of Montvell (Castelló de Farfanya, Lleida), focused on the excavation of open-cast quarries to obtain flint nodules, a rock profusely used in the manufacture of stone tools carved throughout prehistoric times.

These signs were confirmed by the archaeological excavations that began on the site in 2015 and continue to this date. The interventions have revealed the presence of four quarry fronts aligned and staggered on the same hillside, maintaining a certain equidistance between them. Its exploitation is centred on a superficial exploitation of those limestone layers that contain flint nodules. The poor development of mining exploitation, the opening of successive mining fronts and the dynamics of the strata and rubble heaps that overlap on these fronts and along the slope lead us to interpret that exploitation began at the lowest levels of the slope and subsequently opened new fronts in areas located at higher heights. The radiocarbon dates confirm this, as they allow us to specify the moments of exploitation in terms ante quem and post quem. That is to say, we have not been able to date directly the moments of mining exploitation but we have been able to fix their chronology in an indirect way, starting from the dates obtained for the layers on which the rubble tips are located and those which, in turn, cover the evidences of the mining exploitation.

Thus, we can establish two exploitation phases for the lower sequence of the Montvell quarries: the oldest would be located at a time prior to the final Mesolithic, i.e. older than 6000 BC, and the most recent in a recent phase of the ancient Neolithic, between 5000 and 4500 BC. These quarries constitute the first case of a deposit specialized in the extraction of flint in the Northeast of the Iberian Peninsula, constituting this flint a raw material that was object of an important exploitation and distribution throughout prehistory. A preliminary review of some archaeological collections in the area allows us to document the presence of products manufactured with this rock in prehistoric sites of different chronology, from the Middle Palaeolithic to the Final Neolithic, which is symptomatic of the importance of this raw material in regional prehistory. Moreover, we have documented instruments made with this flint in Neolithic sites very far from Serra Llarga, which allows us to document a distribution of these products to the Pyrenean mountains and their circulation through the tributary valleys of the river Ebro.

Based on the analyses financed by the Palarq Foundation, we intend to characterise from an archaeological point of view the flint of the Castelltallat Formation that was exploited in the quarries of Montvell. Given its similarity with other flint that appear in other formations of the Ebro Basin, we are resorting to its geochemical analysis, that is, to the study of its composition, determining and quantifying with great precision different elements of the periodic table. The technique used is Inductively Coupled Plasma Mass Spectrometry (ICP-MS) with laser ablation, which allows samples to be analysed without destroying them. In this way, we can analyse the remains of museums and other archaeological collections without any risk to their integrity, and thus establish the relationship between the different archaeological sites in the north-east of the peninsula and the mining contexts discovered in Montvell.