The manufacture of large-format thin sheets of the Abric Romani homes is a project that will allow us to determine the number of human occupations in Mousterian Qa level.

This objective is focused on the analysis of the record in the sediments produced by the use of fire. 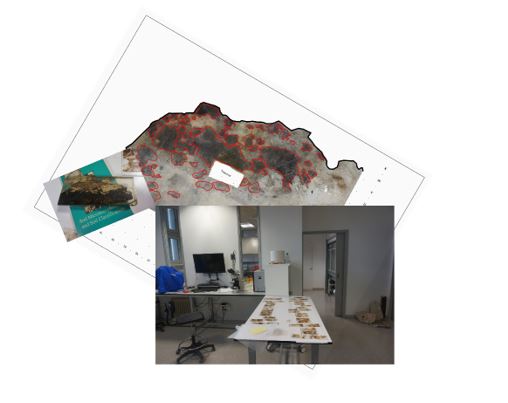 The current human impact on the Earth’s crust is as evident as it is on the atmosphere and its temperature, in the current scenario of so-called accelerated environmental change by human populations. The sciences of the study of the past also record these environmental changes in the Earth’s crust although their scope is not at all similar to the present one, as some industrial and urban landscapes of our contemporary geography also suggest. Geo-archaeological research in the last decades of the last century has increased interest in research projects based on the sediments and landscapes transformed by human populations in the past.

This project consists of the manufacture of thin sheets of Mousterian homes, dated 60,000 years ago, and will offer us the possibility of observing how the cultural and natural sedimentary processes responsible for the formation of the archaeological level interacted.

The cultural sedimentary processes are related to the registration of homes in the prehistoric settlements in El Abrigo. While natural processes are related to the environmental conditions that guide the burial and preservation of archaeological sites. Microscopic observation of large-format thin sheets is one of the best ways to characterize the relationship between both sedimentary processes. This frame of reference is an aid to the understanding of the formation of archaeological sediments and can be considered as a path of analysis similar to the taphonomy of sediments.

The large format thin sheets cover an observation scale intermediate between field descriptions and analytical determinations of sedimentary components. The samples are obtained undisturbed in the field in the form of monoliths. In the laboratory they are hardened with polyester resins, cut into blocks and polished with a grinding machine, to acquire flatness on a glass slide with a standardized thickness of 25-30 microns.

One of the main challenges of this research project is to determine the microstratigraphy of the archaeological level Qa. The stratigraphic correlation, among more than 50 samples, offers the possibility to describe how the microstratification of sediments at this level is. The samples were taken from the excavated surface of the Qa level. This horizontal sampling is related to the main objective of the Abric Romani project dedicated to the characterization of the size of Mousterian settlements through the spatial distribution of archaeological remains and structures such as homes. More than 60 homes were exhumed at the Qa level and, in some of them, the stratification of burnt and unburnt sediments was distinguished during the excavation.

Subaerial exposure affects both burned and unburned sediments in the homes. Some of these modifications can be attributed to the repeated use of fire, which we call intra-occupational episodes. Other modifications may occur on unburned sedimentary materials, which separate phases of abandonment of the home (inter-occupational episodes), often unnoticeable during excavation. In addition, the use of fire in the same firebox must be considered congruently (for the same purpose) or incongruently (for a different purpose). This processual approach is usually expressed through morphological-analytical descriptions based on the composition of microrests, factories and microstructures of the sediments. The interpretations arising from these observations are supported by the conceptual framework of disciplines such as experimental archaeology, sedimentary petrography and soil micromorphology.

The study of the thin sheets of the Abric Romani households has the microarchaeological interest of singling out episodes of fire use in the microstatigraphic record of the Qa level. The widespread use of fire in the Neanderthal settlements of the Abric Romani are perhaps one of the first manifestations of the recording of human-induced environmental impact on the surface of the Earth. The knowledge of how these Abric settlements are, through the spatial distribution of homes in the excavated surface, has opened a comparative way that has allowed testing the similarities between current and past human settlements by hunter-gatherers. This similarity suggests that there has been a unity in human behavior since at least the Upper Pleistocene. Therefore, its distinction can be attributed to the geographical and temporal distribution of these past human populations.