Looking for the soundscapes from the past

Wall paintings can be up to 3 meters high

Archaeoacoustics studies the acoustic properties of the landscape

The fieldwork was done with permission granted by the Council of Archaeology, INAH.

Santa Teresa Canyon is located in the Sierra de San Francisco, in the central zone of the Baja California. The art of this mountain range is spectacular: painted in the Great Mural style, it was declared a World Heritage Site in 1993. Its most relevant feature is the large size of the figures, which reach up to three meters in exceptional cases, representing humans and animals along with abstract figures difficult to interpret. Although the dating of this style is still the subject of debate, it seems that its realization lasted for several thousand years until the beginning of the first millennium before our era. This means that the Cochimí ethnic group that the Spanish colonizers found there is earlier, a population that seems to have arrived in the area in the first centuries of our era. The Jesuit missionary Miguel del Barco (1706-1790) claimed that the natives explained that the murals had been made by giants who had come from the north and who had lived in that region before them.

The indigenous populations of the Baja California that describe the 18th century sources have certain similar traits that can help us understand the producers of those paintings. Apparently they performed ceremonies at night in ravines in which they danced during several days. The shamans, who covered themselves with long layers of human hair, conducted the ceremonies and used rattles, a drum like a shamans, percussion instruments made of small bones, flutes and  buzzers. Although the sources that relate these customs are more explicit in reference to the northernmost populations, in practically all the peninsula there has been found material culture associated with these. On the other hand, the missionary father Juan Jacobo. Baegert (1717-1772) related that the sorcerers of the Guaycura, who lived in the southern zone, “sometimes enter a cave and when they change their voices they try to give the impression to the people that they are conversing with some mysterious being”. All this comes to tell us that music was important for the native peoples who lived in Baja California both in modern times and according to archaeological findings in the past. 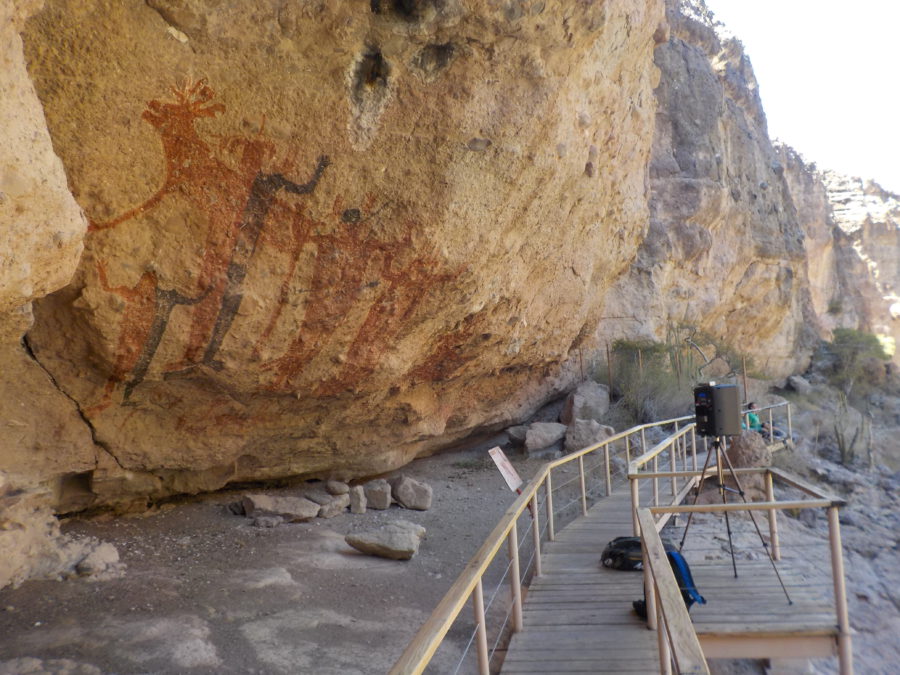 The research carried out in the Santa Teresa Canyon had as its objective the study of the acoustic properties of the landscape, to answer the question of whether places with special acoustics could have been prioritised when choosing the rocky coats to paint. With a methodology designed with the help of Dr. Angelo Farina, professor at the University of Parma specialized in acoustic engineering, during the fieldwork we analyzed on the one hand the acoustics of the canyon and on the other that of a selection of rock shelters. As for the canyon, the acoustics of more than seven kilometers of the ravine were measured with measuring stations separated 500 meters one from the other. The results indicate that the best acoustics can be found precisely in the area with the two most profusely painted shelters, which are the spectacular Cueva Pintada  and Cueva de las Flechas, as well as in the area of Cueva de San Julio, also with a large number of painted figures. The analysis of the data also identified that the acoustics are also particularly good in the two sites with old engravings (stone de Chuy and Cueva de Los Corralitos). Contrasting with these good results, we could verify that nothing differentiated the acoustics of the coats with or without cave art, which indicates that it was more important the good acoustics of the area around where the coats were painted than in the coats themselves. The results make sense if we remember that the fountains tell us about the importance of the dances in the bottom of the ravine.

Archaeoacoustic work in a cave to the north of  La Cueva de los músicos ©.

Working at Santa Teresa Canyon was both a challenge and a privilege. The area is only accessible by mule and after three hours of descending the steep slope to the ravine and as many hours to the campsite, there is no longer an immediate possible connection to the outside world. The few people who lived in the ranches of the canyon abandoned a few decades ago due to the serious and prolonged droughts that caused them to lose all their livestock and therefore the area would be completely deserted if it were not for the guides and tourists who today go down to admire the paintings. Without the possibility of buying food or any kind of material, the fieldwork needed a meticulous previous planning that allowed a campaign without surprises except for a last day with hardly anything to eat because of the low level of food in the pantry. Seeing the stars without light pollution, watching our guides with their jeans hat hunting mules in a loop or walking along the sidewalks bordering the high ravine are memories that will hardly disappear from memory.

Once the data have been analyzed, the results of the project have been presented at the congress of the Society for American Archaeology (Albuquerque April 2019) and at the “Arts, Landscapes and Sound Objects of the Past” congress, IX Symposium on the History of Art (Bogotá, September 2019), in addition to having been explained at a seminar at Universidad de Barcelona (April 2019). A first publication of the results will see the light in the near future.