Award Ceremony of the National Award for Archaeology and Palaeontology

It is endowed with €80,000 and is the first private initiative in this field

Madrid, 26 November 2018 – The National Archaeological Museum of Spain has hosted the award ceremony for the first edition of the Palarq Foundation’s National Award for Archaeology and Paleontology to the project ‘Building Tartesos’, which sheds new light on the importance and extent of Tartessian culture, highlighting the discovery of a big animal sacrifice (hecatomb) in which 52 horses in an anatomical position stand out, being the first documentation of this type of ritual throughout the Mediterranean. The winning team is led by Dr. Sebastián Celestino Pérez and Dr. Esther Rodríguez González, archaeologists from the Consejo Superior de Investigaciones Científicas (CSIC) and the Instituto de Arqueología (CSIC-Junta de Extremadura). 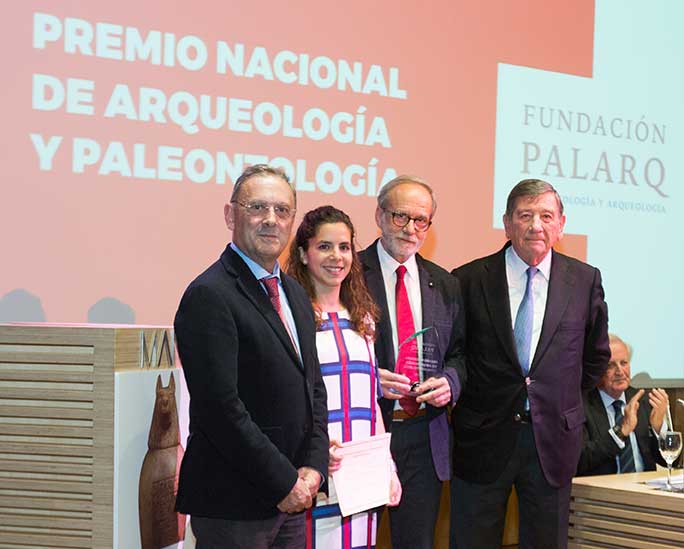 Presentation of the Award to the winners, Dr. Sebastián Celestino Pérez and Dr. Esther Rodríguez González (first and second from the left respectively), by Mr. Antonio Gallardo Ballart (first from the right), president of the Palarq Foundation, and Mr. Román Fernández-Baca, General Director of Fine Arts

The Palarq Foundation is a private, non-profit entity created to support Spanish Archaeological Missions abroad, excluding Europe, within a perspective that extends from the paleontological stage to prehistoric and historical periods of monumental interest. Its president is Mr. Antonio Gallardo Ballart and its director, Carolina Bähr Vollenweider. Established three years ago, it is present in 22 countries thanks to the support presented to Spanish research teams. In 2016 it supported 22 projects and in 2017 a total of 32 projects, all of them outside Spain and Europe. In this year’s call, 44 projects have been approved.

The event was attended by the Director General of Fine Arts, Mr. Román Fernández-Baca Casares; Mr. Andrés Carretero Pérez, Director of the National Archaeological Museum of Spain; Mr. Antonio Gallardo Ballart, President of the Palarq Foundation; Mr. Andrew Selkirk, member of the Jury and former Vice-President of the Royal Archaeological Institute and co-founder of the British Archaeology Award;  Luis Monreal, Jury spokesman and Director General of the Aga Khan Foundation and Dr. Josep Guitart Duran, Emeritus Professor of Archaeology at the Universidad Autónoma de Barcelona and currently president of the international project Tabula Imperio Romano – Forma Orbis Romani, promoted by the Union Academique Internationale, as well as various authorities of the Regional Government of Extremadura.

The Prize is endowed with €80,000 and is the first private initiative to recognise the excellence and originality of Archaeological or Paleontological Projects, directed by Spanish research teams, and developed both nationally and internationally, without restrictions of cultures or historical periods. It is biennial in nature and has been awarded to those research teams belonging to a Spanish institution: universities, research institutes, CSIC, ICREA and related, who have been directing an Archaeology or Paleontology project in Spain, Europe and the rest of the world, in course at the time of the announcement of the Award.

The international Jury that chose the winning project last Friday, November 9, was part of it:

Five other projects were finalists out of a total of 25 applications submitted: